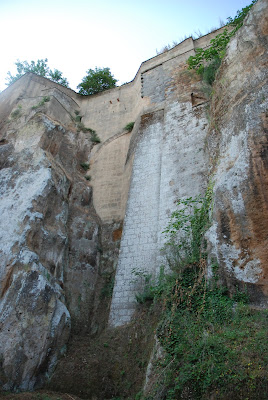 Cathy and John chose an early morning walk around Orvieto. Kendra caught up on the sleep debt from her recent Contiki tour. The walk took us both above and below the ramparts that protected this ancient hilltop town from invaders. At the time, there was only one entrance to the city--a narrow stairway. Today, there are five gates to allow citizens and visitors access. 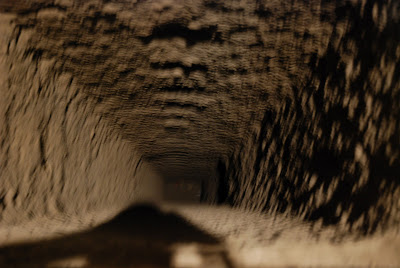 We went on an hour-long tour of the only two caves that are open to the public. Pictured above is a deep well to supply water in times of siege. The other 1200 caves are private-- meaning they are under homes and businesses. 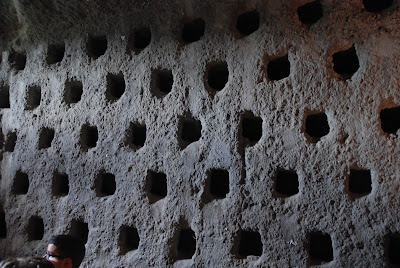 Enterprising residents raised pigeons by the thousands as a source of food during sieges. Pigeons cost nothing to raise as they fly out to forage for food and then return to their nifty private homes or the cooking pot. Pigeon is a part of the local history and is often found on menus in Orvieto. 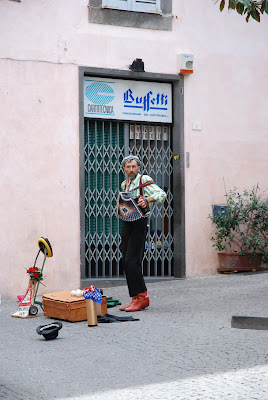 A street musician entertained us at lunch. He must have spent the money his mother gave him for music lessons elsewhere. Still, he played with enthusiasm and in the hope that some tone-deaf passersby would drop a few coins into his hat.

Orvieto is mostly a sleepy hillside town (at least in the tourist off-season), no more so than on an early Sunday morning. We walked most of the Rupe--a quiet, three-mile path that circles the town. Always on one side are the ancient ramparts, while on the other are wonderful views of the Umbrian countryside steeped in mist and clouds in the early morning. At many places on the path, the only sound was from birds. Even the traffic below was only a quiet hum. The experience was very peaceful.
Strolling back to our apartment, we encountered a few people out walking their dogs or visiting with neighbours. Otherwise, we had the path to ourselves.

We breakfasted back at the apartment, relaxed a few minutes, and then set out with Kendra to take in the Underground Orvieto Tour. The present day town of Orvieto was almost entirely built from materials dug from the ancient ruins. First the Etruscans, then the Romans occupied the area. The actual town is perched on the remains of an ancient volcano that spewed up tufa and potsilano (the two building materials used then and today). The material is relatively soft (at least compared to marble or granite) and can be dug into with hand-held tools like picks. It would have been very labour intensive, but if one had the energy and patience, a cave could be dug.  The citizens made a primitive, cave hospital. Only recently have any of the over 1200 caves that lie under the town been opened to the public, although archeaologists have been scouring them for decades.
The tour consists of quite steep descent into about 100 metres of tunnels that have been opened up. The guide pointed out an olive press, a deep Etruscan well (over 130 feet deep), and a series of niches in the walls that housed pigeons in the days when the town might come siege for weeks on end. Each family dug a passageway under their dwelling to store wine and olive oil, and to house the pigeons that provided a source of food. Other animals used for food would have required food and water--not easily available in wartime, whereas the pigeons simply flew above the invading army, found food in the valley, and returned home to the roost (as pigeons instinctively do) each evening. Each family had its own pigeon coop and used the birds for food. Pigeon became a staple of the diet, and even today pigeon (piccione) is featured on the menus of many Orvieto restaurants.

During the dying days of World War Two, the Nazis bombed the aircraft hangers and railway station in Orvieto as they retreated back to Germany. The local citizens used their personal caves as bomb shelters. Today, in some shops there will be a section of glass on the floor through which customers can see caves.

In many ways Orvieto's Duomo is more impressive than larger, more famous cathedrals we've seen in other cities, such as St. Peter's in Rome and the Duomo in Florence. Certainly the facade is much more interesting. The structure, begun in 1290, took almost three centuries to complete. The facade, which has been restored a number of times,  is astonishing. Entire scenes from the Bible are done in bas-relief on marble, including some grim characterizations of the Last Judgement where figures entwined with snakes suffer in Hell. On the top of the four pillars are bronze statues of Matthew, Mark, John and Luke. Most amazing of all are the mosaics. The one of Mary being crowned is stunning with its gold background.

Inside, at first, the church seems unimpressive. The Duomo is dominated by empty space and black and white striped columns--all of which direct your gaze to the glorious  high altar framed by an original 14th century stained glass window. The organ has over 5,000 pipes--although they cannot all be seen. The single most impressive art in the church is a Pieta carved in 1579 by artist Ippolito Scalza. There are four figures: Mary holding the body of Christ, Joseph with his carpenter tools, and a figure at Christ's feet--likely Peter. The agony on the brilliantly carved face of Mary is moving.
There are two main side chapels: Chapel of the Corporal and Chapel of San Brizio.
In the former, the famous altar cloth stained with blood is encased behind glass and framed in turquoise. According to church orthodoxy, a priest, Peter of Prague, who doubted the concept of transubstantiation had his doubts removed when the host he held above his head during Mass began to bleed profusely enough to stain the altar cloth. The event was declared a miracle and the pope ordered a cathedral to be built to display the sacred relic.
The second chapel is much more dramatic. Local artist Luca Signorelli was commissioned to paint frescoes on much of the interior of the church. The ones in the Chapel of San Brizio are spectular--both for their visual impact and their originality. He captured vivid scenes of the Resurrection and the Last Judgement. The Last Judgement scenes are grim. Devils torment sinners and winged angels stand guard lest any of the souls try to escape. The details are amazing--a bit fanciful perhaps--but drive home the religious point. The room is awesome (in the true sense of the word), especially when you consider that Signorelli completed the complex work in five years. There is a poignant scene with Mary Magdalene and the Virgin Mary with the dead Christ who is the image of Signorelli's son who died from the plague when the artist was working on the frescoes.
The bronze doors of the Duomo are recent--they were finished in 1970 by Emilio Greco. They too depict religious scenes.

Altogether, Orvieto's Duomo deserves as much attention as St. Peter's.

Photos are not allowed inside the Duomo, but the following may give some idea of the scope of the facade.