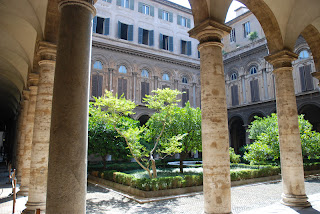 The Gardens at the princely Palazzo Doria Pamphilj, a private residence
that houses an excellent art gallery. 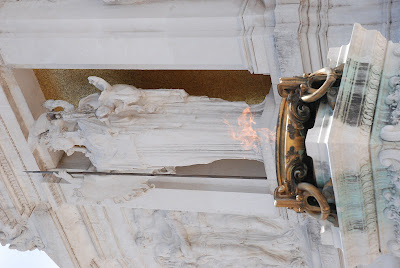 The Eternal Flame at the Tomb of the Unknown Soldier. 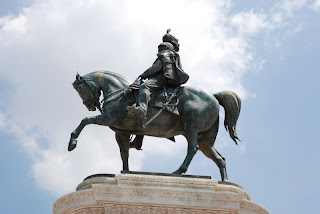 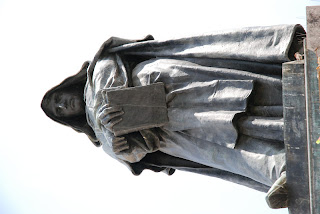 Giordana Bruno, a Dominican friar who was burned at the stake in 1600, looks down on the market vendors in Campo de Fiori. 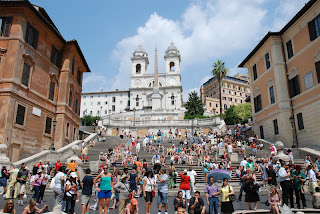 The famous Spanish Steps are adjacent to the John Keats house
(salmon-coloured building to the right).

Our final day in Rome was spent doing two things: Cathy and Kendra shopped (and met John for lunch at Vittorio Emanuele II monument), while John squeezed in visits to two museums: The Pallazzo Doria Pamphilj and the Keats-Shelley Museum.
The Pallazzo Doria Pamphilj is said to have 1000 rooms. It is the private residence of a powerful family which traces its roots back to the middle ages. Over the years, the family  increased its power through strategic marriages and close alliances with the Vatican. Today, the art work is open to the public--and what a collection it is! As you walk through what used to be private chambers, the walls seem to be papered with paintings. Gorgeous, opulent, almost decadent that such a collection could have been amassed by one family: Carravaggio, Valazquez, Raphael, Titian, the Flemish painters... the list goes on. Jonathan Doria Pamphilj, heir to the family fortune and art collection, seems to be a nice fellow as he narrates each room and describes his favourite paintings on the audio guide that goes with the price of admission. It was a pleasure to view the gallery: in many of the rooms I was the only person. There are leather chairs where you can sit and enjoy individual paintings at leisure. It was glorious to know that outside the palazzo the traffic was roaring and tourists were frantically rushing from famous site to famous site--while I was basking in almost compete silence in the magnificent palatial rooms.
After lunch, I visited the Keats-Shelley House which is adjacent to the Spanish Steps. Keats lived here briefly before he died tragically at the age of 25. The actual museum is pretty much as it was when Keats lived there, although the city authorities ordered that all the furniture etc be burned when Keats died in 1821 of consumption (tuberculosis). They thought that burning the furnishings would prevent the spread of the disease. The museum has original letters and manuscripts, some of which are very touching as Keats faced his death which he knew was inevitable. A professor from Baylor University delivered a paper in the small library--it was merely a coincidence that it happened at the same time as my visit. Frankly, it was not very good: there was a singular lack of logic and originality. Much of it sounded like to could have been cribbed from Wikipedia.
Meanwhile, Kendra and Cathy shopped. It appears that most stores in Rome (Italy, for that matter) are having sales.
We will splurge at a restaurant tonight, get a good night's rest, and set off at 8:30 tomorrow morning in a car that has been arranged to take us to the airport.
We are not looking forward to a long flight, and a 5 1/2 hour layover in Toronto! However, it will be good to sleep in our own beds after three weeks on the road.

Arrivederci from Rome.
Posted by Mrs. McPhail's Grade one class at 10:07