A Day Trip to Cortona 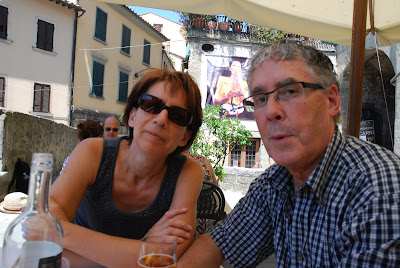 The three of us had a pleasant day trip to Cortona, another medieval walled city. Cortona is the southern most town in Tuscany--just a few miles from the Umbrian border.
We caught the funicular, then a regional train, followed by a bus and arrived in Cortona at 10:00 am. One of the appealing things about the town, aside from the panoramic Tuscan landscapes visible from many vantage points, is that there are several (at least seven)  churches for a community of about 2500 people. We explored three of them: the Duomo, the Basilica of Santa Margherita  and the Church of St. Francis.
The Duomo has an interesting white and grey interior, with several small chapels cut into the walls. There are evidently many religious relics on the alters, but all are covered with white cloths that hide embedded parts of saints in the marble.
Santa Margherita is a popular local saint originally from a wealthy family. She became an unwed mother and thereafter devoted her life to helping the sick and poor. The well preserved 13th century crucifix in the church is reportedly the key to her sainthood because it talked to her. It's a little grim to see her remains encased in a glass coffin as the centre piece of the church. Like so many churches in hillside towns, Santa Margherita is ornate and magnificent in its size. How a town could afford such a masterpiece, which obviously took decades to complete, is a mystery. Such was the power of the Church back then.
The Church of St. Francis, 13th century, is considerably more modest. The most impressive feature are the original wooden beams supporting a sizeable church. The authorities are working on restoring some frescoes that were whitewashed by dull-witted church officials centuries after the church was completed. There is a precious relic framed in the altar--a piece of the cross reportedly brought to the church by Elias after he visited Constantinople.
In all three churches one finds glorious religious paintings. If the Mendel in Saskatoon had even one of them in its permanent collection, it would be one of the stars of the Canadian art gallery scene.
Our lunch, under the canopy at the Ristorante La Loggetta provided an opportunity to recharge our batteries after a steep walk to the Duomo in the Tuscan sun. The orrechiette and tortelli (stuffed with ricotta and spinach) hit the spot. Some wonderful gelato during the day also perked us up.
We had time to be real tourists and do a bit of shopping in the small shops that line the streets of central Cortona. We purchased a couple of small watercolours, one of the rural region, and one of Cortona seen from below. They are pretty and will remind us of the Tuscan sun when it's -30 degrees in January.
Showers and a rest at the apartment will set us up for another dinner, this time at the unusually named Pizzeria & Restaurant Charlie which Rick Steves claims is popular with families and students. It features wood-fired pizzas, large salads, homemade pasta and grilled meat.
Tomorrow, the long-awaited cooking class takes place when our chef, Simona, picks us up and takes us to her farmhouse for a cooking lesson (pasta mainly I hope). Of course, we get to eat the end result!
Posted by Mrs. McPhail's Grade one class at 10:39