Some Thoughts on Arrival Back in Canada


As we have a long layover in Toronto Airport on our way to Saskatoon, perhaps a few reflections on Italy and Italians would not be amiss. At least it will be helpful to write a few thoughts while they are still fresh in our minds.

Our flight to Toronto was one hour late leaving Rome’s Leonardo da Vinci Airport.  Our Air Canada aircraft, an Airbus, accommodates just over three hundred passengers. Not surprisingly, the waiting area at Gate G 8 had seating for perhaps 30 or 40 people. The result, when it became apparent that the flight was going to be delayed, was like an absurd mosh pit. Fortunately, we were on the perimeter and avoided the jostling and evil looks when passengers intruded into others’ personal space. Interestingly, there was no announcement explaining the delay—and certainly no apology. Air Canada's motto; Never explain, never apologize! Air Canada wonders why it has so much trouble making a profit. The explanation is self-evident. The experience reminds one of the heydays of the notoriously passenger-unfriendly Russian airline Aeroflot when the officials simply opened the plane’s doors and it was every man, woman or child for themselves as people raced across the tarmac, up the stairs to the aircraft and attempted to seize empty seats. When all the seats were occupied, the doors were slammed shut and the hapless passengers who were not so fleet of foot returned to the departure lounge, hoping for better luck the next time a plane appeared.

Our experience wasn’t quite so grim, but it was certainly an eye-opener that passenger comfort seemed so low on the airline’s priority list.

On the bright side, we had one less hour to wait at Toronto Airport to catch our connecting flight to Saskatoon.

Our driver to the airport from the Rome hotel this morning had a heavy foot, but not nearly so heavy as Sandro who met us on July 6. It’s amazing that the streets of Rome aren’t littered with wrecked cars. In many instances, there are no lanes painted on the streets, and cars and motorbikes weave in and out of imaginary lanes—of course, without signaling! Applying makeup, texting and talking on cell phones is a common practice.

On the subject of mobile phones, everyone seems to have one—but Italians mostly talk on them, not text.

Overall, the Italians are very polite, kind people. Everyone seems delighted to see their friends—and even strangers—and the resulting conversation is almost always lively and animated. When someone says Buongiorno or Buona sera it is genuine.
On the few occasions when we shopped in fruit and vegetable markets, we discovered that there is a protocol. You never touch the produce—instead, you point at it and tell the merchant how many or how much you want.  The assumption is that everything is fresh and wonderful—hence, squeezing the fruit is an implied insult that the merchant would sell anything less than perfect produce. The only people who get away with handling the fruit are elderly ladies who choose their fruit and vegetables with great care. Italians seem to have learned not to cross the matriarchs.

It seems that many Italians smoke. The streets are littered with cigarette butts. When regional trains stop at stations, smokers rush for the exits to catch a few puffs before the train pulls out of the station. Mostly, they stand in the doorway, unintentionally impeding passengers who are trying to get onto the train.  By the way, Italian trains are very good: they are quite cheap, most often punctual, and run frequently. The high speed ones are a pure pleasure!

We were told by a very scholarly guide in Siena that Italians hate three things: air-conditioning , clothes dryers (hence laundry hanging from balconies all over the place), and ice cubes.  Our experience with the non-existent air conditioning at the Florence apartment confirms the former.

Italians seem to revere elderly people and babies. We saw several instances where grandparents on the street doted over their beloved grandkids. Italians also love dogs. Everywhere we saw people walking dogs at all times of the day.

The hill towns are jewels. Our experience was limited (Cortona, Siena, San Gimignano, the five villlages in the Cinque Terre, and Orvieto). Vehicle traffic is strictly restricted in the towns. Visitors with cars must leave them outside the walls and walk into town. The towns are walker friendly—although the steep hills and staircases are a test of one’s endurance on hot days. Both Siena and Orvieto have sets of escalators that help to get people from the parking lots to the town above.

The inhabitants regard tourists with bemused expressions but genuine hospitality (not surprising since tourism is a major prop of Italy’s economy).  Their warmth made communication possible when we spoke only English and they spoke only Italian. We sensed that even our clumsy attempts at Italian were appreciated and always resulted in a friendly exchange. The least helpful people we met were employees in the tourist information office in Rome!

It should be no surprise that Italy produces such great wine and so much of it. During our journeys through Tuscany and Umbria endless hillsides were lined with beautiful rows of grape vines. When there weren’t grapes, the hills had groves of olive trees. Both the wine and the olive oil are splendid.

A series of storms along the eastern USA and Canada had a cascade effect on air traffic in Toronto, causing flights to be delayed or cancelled. Our flight to Saskatoon was 90 minutes late leaving, but the pilot must have put the jets into overdrive because we were only 60 minutes late into Saskatoon.  It was 2:30 am by the time we got home to Outlook. Because our biological clocks have not reset, we were awake at 6:00, and out weeding the garden by 7:00 a.m. I imagine we’ll need an early bedtime tonight.

Our dog Quinton was glad to see us, although he is always a bit standoffish when we leave him for extended periods—a sort of “Now, tell me again, who are you guys?” attitude. Cathy Morrow looked after Quinton while we were away. He loves being with her. Quinton spent his mornings at the golf course enjoying morning toast and coffee with Cathy, chasing rabbits and otherwise having fun. I'm afraid he finds us rather dull company by comparison--although he is far too polite to say so. After all, he knows who pays for his dog food and treats--and his overpriced haircuts! 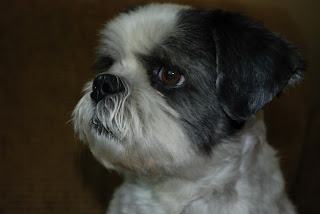 Thanks to Carrie, we arrived home to find our yard and vegetable garden in wonderful shape!