A Day in the Cinque Terre 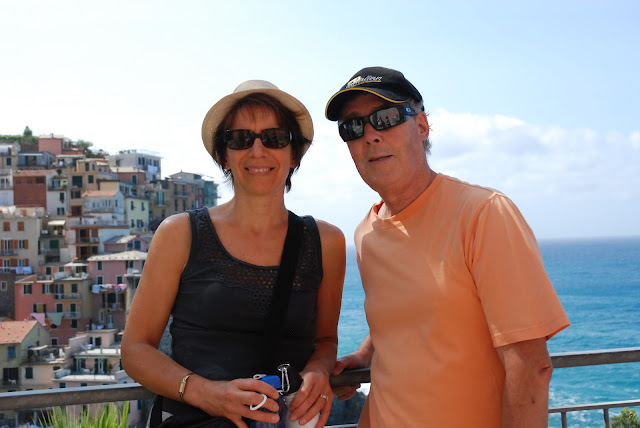 Manarola,the first of five villages on the Cinque Terre Trek.

Our decision to take the Cinque Terre trek was one of the best we've made so far. Although the day was long (we boarded the bus at 8:00 am and didn't get back to Florence until 8:30 pm), it was sensational. Our guides, two brothers Alex and Julian, provided just the right amount of information and were very attentive addressing everyone's needs, especially those who chose not to make the 4.5 km hike between two villages. The hike is quite demanding: for the entire time, with brief exceptions, you are either ascending or descending, sometimes at a very steep pitch on trails that are made of sharp, loose stones. Sometimes there are handrails--most often not. After the first 200 metres you are drenched in sweat--it's not a pretty picture meeting panting, perspiring hikers coming the opposite direction on the narrow trail where someone has to step to the side to give way to the other. Hikers are a polite breed, smiling in recognition at others involved in the same venture and frequently drawing on dwindling energy supplies to gasp a greeting as they meet each other.
Cinque Terre is about two hours north of Florence in the so-called Italian Riviera. We travelled on the autostrade, a first rate highway where posted speed limits are optional and tailgating is obligatory. Our bus driver Franco was nonplussed as he used the size of the bus and liberal use of the horn to maintain our position in the passing lane along with zippy sports cars, Mercedes, etc.
We arrived above Manarola about 10:00 o'clock and left the bus for the day. Descending steep, winding stairs, we reached the first of the five villages. During off season they have only a few hundred people, but during the tourist season--well, that's another story. We were there on Sunday and saw townspeople chatting with each other in the streets, going to church and just enjoying life on a beautiful, slightly breezy day. They seemed oblivious to the tourists, which was very nice.
Our group of about 25 took the train from Manarola to Corniglia where we walked up a long zig-zagging set of stairs (382 steps) to reach a lovely restaurant overlooking the Mediterranean Sea where we had lunch The appetizer (see photo) had a wonderful selection of seafood with a small serving of potato salad. The anchovies were marinated and were totally unlike the appalling and salty canned version we buy in Canada. The baby octopus is soft and delicious, not rubbery like the versions sold in North American restaurants. The restaurant was right at the starting point of the hiking trail that would take us to Vernazza. The hike, as described earlier is demanding, but well worth the effort. The ratio between beautiful scenery and height increases with every step.
From Vernazza, we took a train to Monterossa, the end of the trail (we would visit the first town Riomaggiore last). Monterossa is the most touristy of the five towns because of its long beach which was shoulder-to-shoulder with sun worshippers on Sunday.
The plan had been for us to take a boat back to the first town and see the entire Cinque Terre from the perspective of the water. Unfortunately, the sea was choppy, making docking impossible, so we rode the train (by this time jam-packed with other equally sweaty tourists) to Riomaggiore--a disappointment, but unavoidable.
We were treated to a glass of Cinque Terre white wine on a lovely terraced restaurant from which we could see the entire coast line of this very beautiful part of Italy. The easier part of the trek was left to the end: a walk from Riomaggiore to Manarola on the via Dell'Amore.   Along the way, we saw padlocks locked to wires, cables and fences.  Closing a padlock with your lover and then throwing the key into the sea below at a certain spot is a common ritual in Italy.  Benches along the way are named for lovers from Greek mythology. We then took the train back to Spezia where we boarded our bus for the ride back to Florence.
A slow day in Tuscany is next!  Ciao.
Posted by Mrs. McPhail's Grade one class at 00:24